As a family that loves to travel and visits new places, we are always on the lookout for the next new and exciting product to make our lives easier, so we were delighted when More2Explore asked us if we would like to review their new Adventure Belts.
The Adventure Belt was first thought of when Lucy (the creator) was out on a day trip and she was separated with her 5-year-old Charlie (Every parent’s worst nightmare). Luckily Charlie was found and back with mum again 10 minutes later, but after what probably felt like a lifetime to Lucy, she knew there had to be a better way to explore and be safe. At age 5, Charlie was too old for toddler reins, but Lucy knew she needed something, the adventure belt was born.
*There is a video at the end of the post for those that want to see the belt in action*
If you are a regular reader, you will know that Naminé, who’s 2, is a real adventurer (the Adventure Belt was made for her!) and Kairi being 4, is a child who really knows what she wants and is becoming a ‘big girl’ fast. As a mum, I am desperate to give the girls their independence, but I need them to be protected too, I always feel like this is a constant battle.

The girls are such different children that I wasn’t sure how the Adventure Belt was going to work for both of them, but it did. Once we received the adventure belt, I started putting it to the test straight away. I wanted to know exactly what this belt could do and how it could be useful with both of our girls. 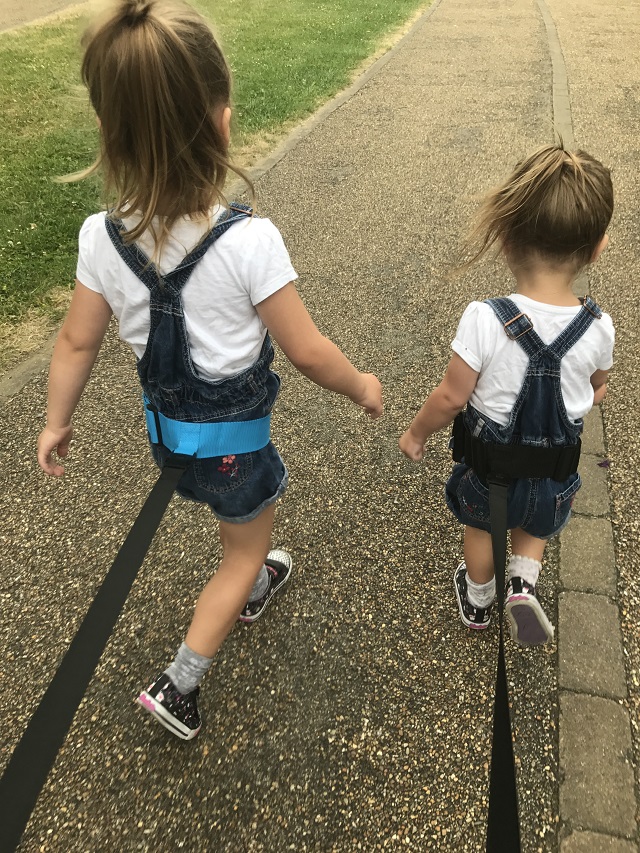 My biggest concern was getting the girls to wear the belts. Naminé hated reins when she was younger and Kairi was a child that had no need for reins and I was worried she would now feel too old. However I needn’t be, as soon as the girls watched me open the packets of their belts they were desperate to put them on and to my surprise they have asked to wear them (and by asked I mean physically gone and got them) every single time I have asked them to put their shoes on since the Adventure Belts Arrived.
The girls absolutely love the design, Naminé is so chuffed with her Panda Bear (which she calls ‘polar bear!) and Kairi really loves the blue and green grown-up color ‘like daddy’, if this wasn’t enough of a reason for the girls to want to wear them, More 2 Explore went one step further and added a pocket which seals the deal. 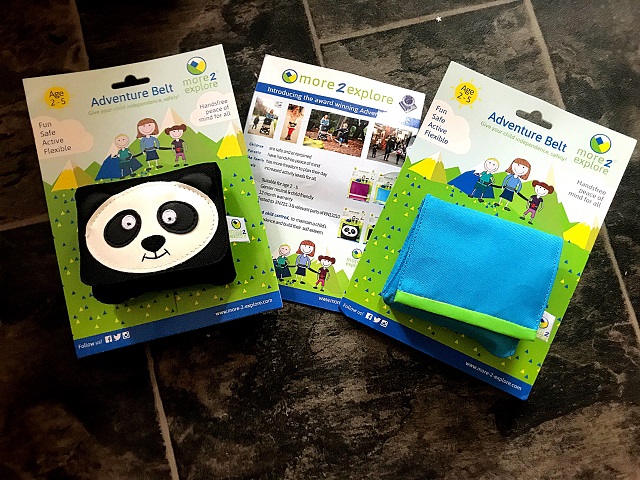 The girls love to fill their pocket up with mini figures (to play with on the train), cereal (to eat on the go) or sometimes leave it empty so they can explore and collect leaves, sticks and stones to bring home. For me, I love how I can give them that little bit extra independence by allowing them to have access to their own snack or maybe a small bit of money, it’s a great way to teach these skills from a very early age.
I also love the ease of the Adventure Belt, it’s not ‘fussy’ like toddler reins. The belts can be worn all the time and with just a simple ‘click’ or ‘un-click’ we can go from safety to complete freedom without any fuss. This is particularly handy when on and off public transport like trains and buses. While outside I need the girls to be close, but often have my hands full with luggage. With a simple click they are at the distance I have chosen (as the attachment belt is adjustable) and completely safe, we can then step on to the transport and with another ‘click’ they are free and can grab a seat while I store our luggage. It’s so easy, I can both click and un-click with one hand (which is extremely helpful when you’re carrying stuff) but at the same time, neither of the girls have the ability to do it as you have to push 3 different parts.

An added bonus for me is that the attachment that goes between us both is stretchy. There is nothing worse than a child on reins who ends up pulling your arm when they are trying to run off to have a tantrum or want to go the other way. With the Adventure Belt attachment, the elasticated attachment takes away that yank of your arm. Firstly because you are not holding it in your hand, but secondly because the attachment takes a lot of the force. THUMBS UP MORE 2 EXPLORE!
As I mentioned, the belts worked well for both girls. I attach Kairi when she is having a hard time listening because she is overwhelmed/tired or just in a bad mood, I also attached her when we visited busy places like local events or when we walked across/along roads. I can see her belt being extremely useful in Disneyland Paris, but also on most weeks when we go out.
For Naminé we are attached most of the time. We have the attachment at its full length and we are both so happy with how I have been able to give her the freedom that she so desperately wanted (as her sister has it), but I hadn’t felt she was old enough to have. I un-attach her as we walk through open spaces like parks and clip her up again as soon as we are the other side. I really love how the Adventure Belt has helped Naminé want to hold my hand and learn about safety (as she isn’t being forced to) and to walk faster too! She has the freedom, but being attached means that she can’t just trail behind us like a snail, shes learned to keep up and is now a joy to walk with.
‘We haven’t used the sling or buggy since we have had the belt!’ 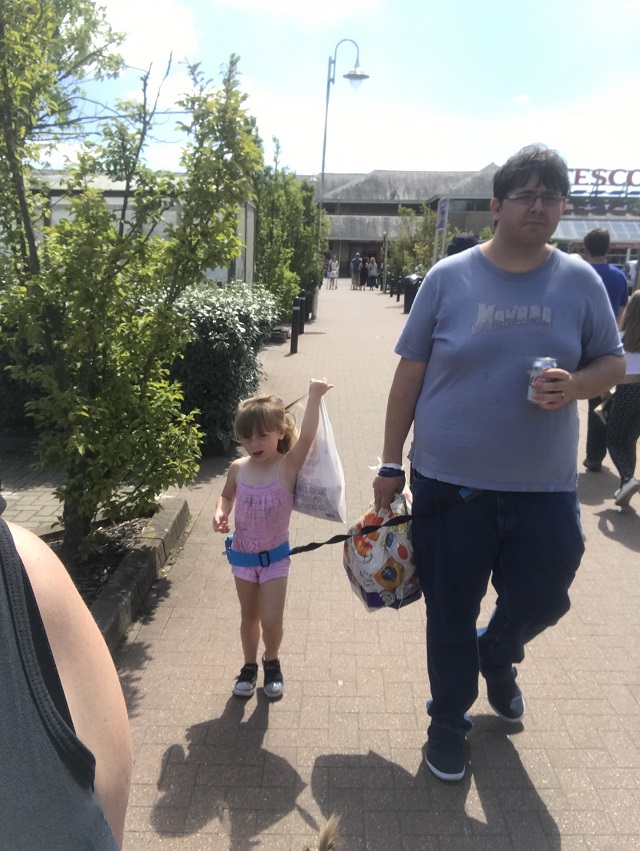 We’ve used the adventure belt at train stations, while walking past the river, at busy events, when walking near busy roads and while out shopping, so we have really put it to the test. For those wondering what you do if you have 2 children, fear not! Wearing 2 belts is simple and doesn’t feel any different to one.
As always, I ask myself ‘What could/would I change?’, ‘What would make the Adventure Belt even better?’ but to be honest, this time I am coming up short! From the amazing child-friendly designs, the little pocket and the stretchy attachment belt to the fact that the whole thing folds up into itself, More 2 Explore have covered everything I want and more. You can really tell the Adventure Belt was made by a parent with a need, for parents with a need. So, I have to say Thank you More 2 Explore for making such an amazing game-changing product, I know your Adventure Belt is going to change the lives of so many families for the better, just as it has done ours.
If you would like to see other days in the life videos, head on over to our Mummies Waiting:Instagram or check out our Mummies Waiting:Facebook Page